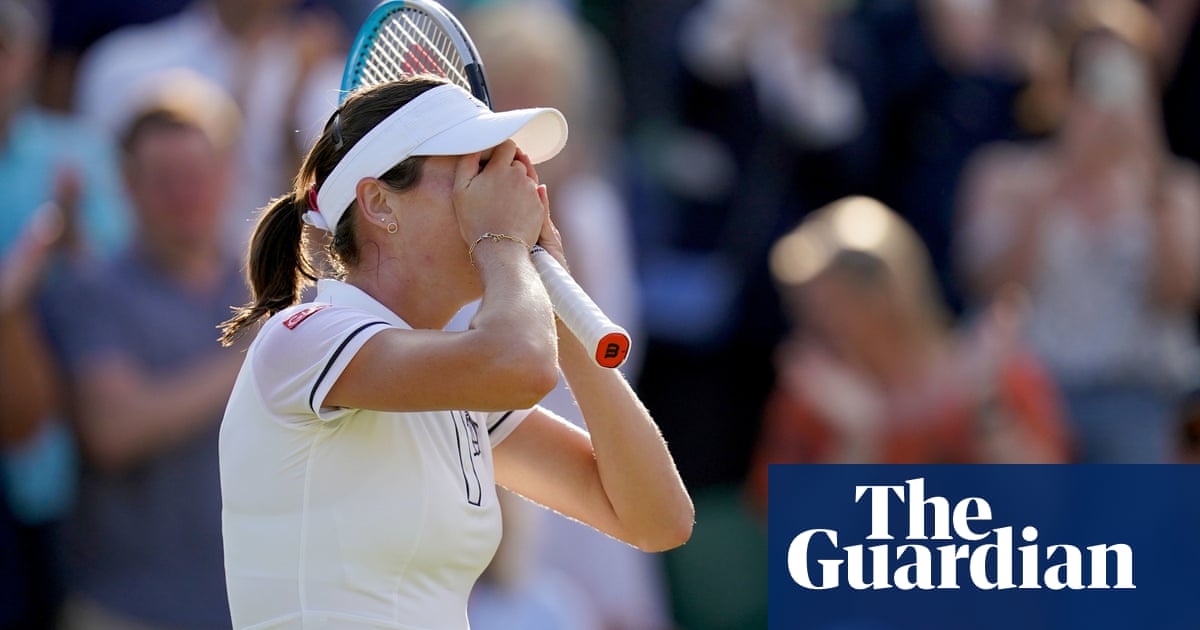 Ajla Tomljanović has continued to fly the Australian standard handed over by Ash Barty at Wimbledon, surviving a nervy final set to reach the quarter-finals.

Watched from the stands by Margaret Court, the new national No 1 battled back from losing the first set to defeat French giant-killer Alizé Cornet 4-6, 6-4, 6-3 on Monday.

In doing so, she became the first Australian woman into successive quarter-finals at Wimbledon since Jelena Dokic 22 years ago.

It wasn’t easy though. Tomljanović went 5-1 up in the decider only for Cornet, who stunned world No 1 Iga Swiatek in the previous round, to fight back to serve at 3-5.

Tomljanović, however, has been brimming with belief this Wimbledon.

She was further fired up by a pre-match chat with mentor Chris Evert, a three-time Wimbledon winner, who told her she belonged on the stage and would reach the last eight.

Regrouping, Tomljanović forced two match points and was undeterred when both were saved.

The 29-year-old secured a third shot at victory after an incredible 26-stroke rally at deuce.

The point typified a 2-hour, 35-minute slugfest in which both players gave their all.

This time Tomljanović finished the job with a cross-court shot at the net that just landed in court, prompting an anxious wait before the umpire confirmed the point.

An emotional Tomljanović was in tears when she spoke afterwards.

“I didn’t think I could do it,” she said. “I didn’t know if I could keep up my physicality and she [Cornet] never goes away.

“I had such great memories from last year [when Tomljanović lost to Barty in her first grand slam quarter-final] and I look back and think I didn’t enjoy it as much as I should.

“I’ve had tough moments this year and now a year on, I am here again.”

Making the victory even sweeter was the presence of her mother Emina in the stands.

Last year Covid restrictions meant she did not travel to London and she was too nervous to watch her daughter’s matches on TV.

“She was at home in Florida,” Tomljanović said.

“I could tell she wasn’t watching. She would walk the dog for hours and then check the score. I was so mad at her because I was like, ‘What if I’m never going to do this again, you missed it.’ It is not easy to make the quarter-final.

“But she is my biggest cheerleader,” she said.

Victory meant her travel agent – father Ratko – has again extended her hotel room. He had initially booked only to the end of the second round on Friday, prompting Tomljanović to suggest he lacked faith in her.

“I play Wednesday, so it’s probably only until Thursday morning – maybe it is reverse psychology for him,” she said.

“Fortunately, they have rooms – but even if I have to share the room with a stranger, I am not leaving that hotel!”

In the last eight the world No 44, will play Kazakhstan’s No 17 seed Elena Rybakina, who beat Croatia’s Petra Martic 7-5 6-3.

In their one previous meeting on Madrid clay last year, the Kazakh won 6-4 6-0, but Tomljanović said: “After last year playing Ash, I think I can face anyone.”