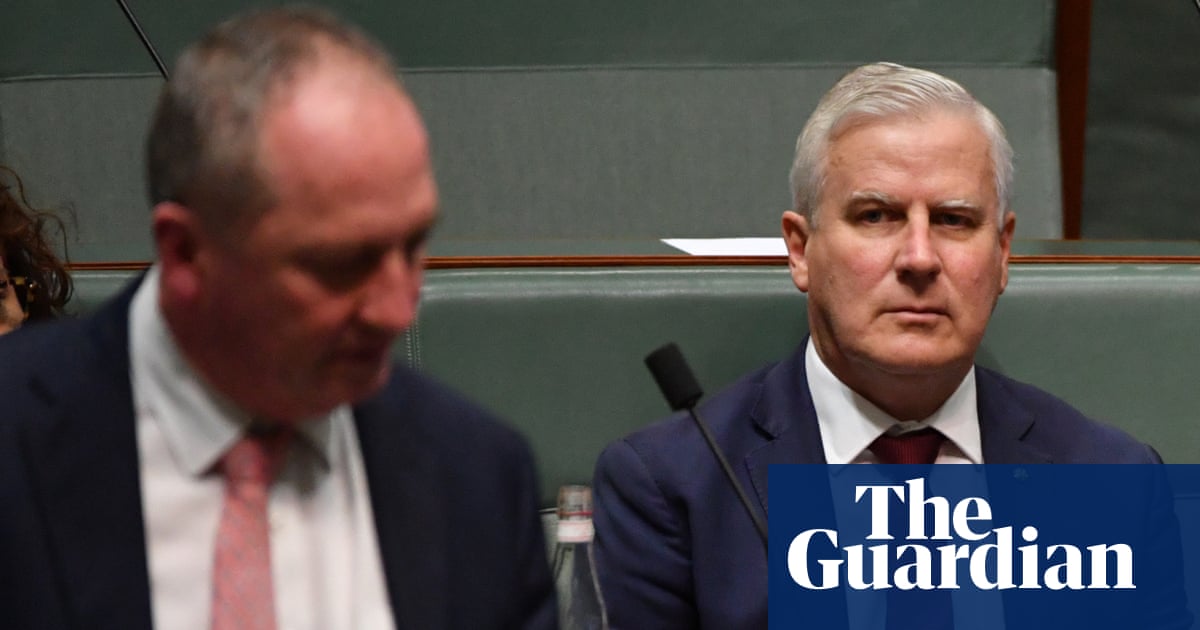 Michael McCormack has suggested that Barnaby Joyce’s unpopularity in the inner city contributed to the Coalition government’s downfall in climate-conscious electorates.

The former Nationals leader, who has not ruled out recontesting the leadership, told Guardian Australia there were “no campaigns against my name and my reputation in inner-city seats” – a clear reference to warnings from independents and Greens that a vote for Liberal moderates was a “vote for Barnaby Joyce”.

McCormack added that “unnecessary” mixed messages on net zero emissions, such as Canavan’s declaration the target was “dead”, “didn’t help” in inner-city seats.

After losing a swag of inner-city seats to independent candidates, including Wentworth, North Sydney and Mackellar in Sydney, and Kooyong and Goldstein in Melbourne, the delicate balance between the Liberal and National parties on the issue of emissions reduction will be an intense focus in the new parliament.

On Sunday, Simon Birmingham, the senior Liberal moderate, said that he hoped the two parties “can continue to work together”.

“But obviously the National party need to look at where the Liberal party has felt this pain and reflect upon how it is that we, together, can manage to form majority government in the future and what will be necessary for us to do so,” he told ABC’s Insiders.

McCormack said the government had suffered swings because Australians were “tired” of “trying times” including Covid, drought, floods and the mouse plague – “none of which were the fault of the prime minister”.

Asked to reflect on Joyce’s role, McCormack said: “The leadership change last year shouldn’t have happened. Whether that influenced the inner-city seats, where I was very popular, and provided a lot of infrastructure as minister, and spent a lot of time in, will be for others to decide.”

“There were no campaigns against my name and my reputation or anything in inner-city seats. I was very much welcomed in those seats.

“They believed in me and what I offered as the leader of the regional party. I’ll let others decide whether that had an influence over the result.”

McCormack said the Nationals had committed to net zero in the last term, and he “sat in the same room as the person who said it’s now dead [Matt Canavan]”.

“You can’t decide one thing as a party and then take the projects agreed [upon] from reaching that decision, and then, when circumstances change, turn your back on what you said you were going to do.”

“Country people don’t tell you they’ll do one thing and then do the other. I don’t operate like that – my word is my bond.”

McCormack said he “wasn’t getting ahead of himself” and wouldn’t rule in or out a future tilt at the Nationals leadership.

“When we know who is going to be there in the party room, then the leader and deputy positions are then left vacated. Anybody can put their hand up and contest those positions.”

The 2022 election saw the loss of several Joyce allies from the parliament, including MP George Christensen and senator Sam McMahon.

The Nationals add the Country Liberal party’s Jacinta Price from the Northern Territory, Andrew Wilcox in Dawson, Colin Boyce in Flynn, Sam Birrell in Nicholls and Ross Cadell in the Senate for NSW.

Earlier on Sunday, Canavan, the Queensland Nationals senator, said the election sent a clear message to the Coalition that “when we go left, we lose”, arguing its “leftist agenda” on climate wasn’t a credible platform.

Canavan pushed back at the idea, advanced by senior moderate Liberals, that the Coalition needed to take a stronger climate action policy to the next election, saying: “What more should we do? Should we adopt a carbon tax, should we double the dole?”

Canavan said the loss of inner-city seats to the teal independents showed that “the Faustian bargain proved to be a complete failure”, and he blamed the moderates: “The policy agenda we took to the election was signed, sealed and delivered by the moderate wing of the Liberal party … Doubling down seems to be the definition of insanity.”