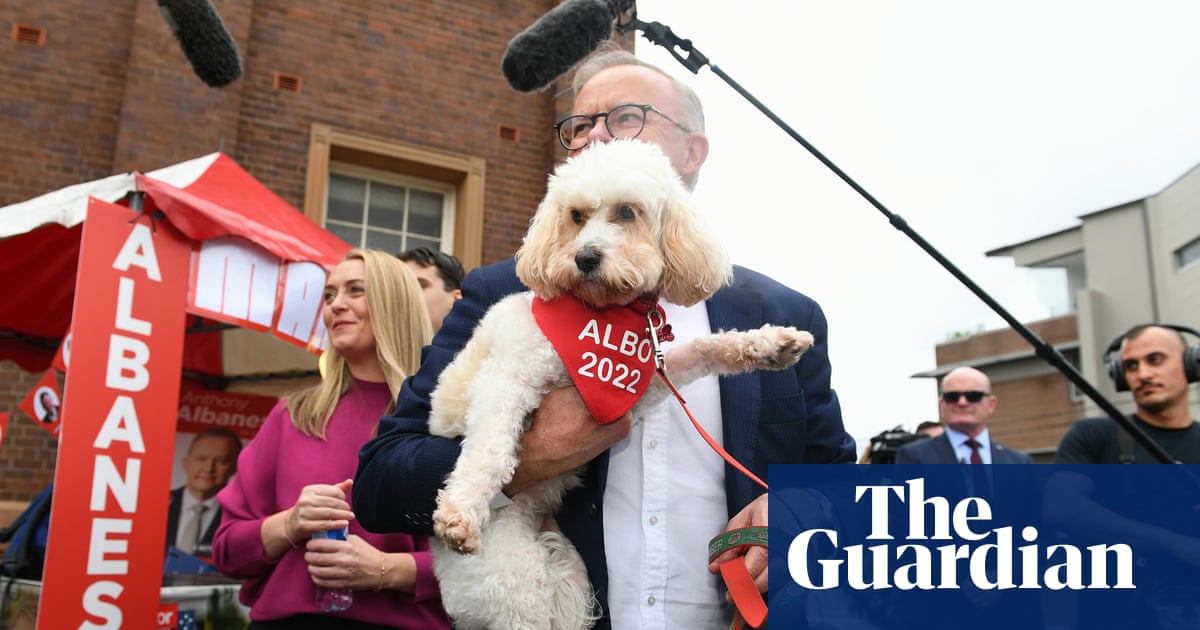 A seismic shift occurred in Australian politics this weekend, with the Coalition government swept from power by the Labor opposition and a wave of independents and Greens MPs.

But it wasn’t all serious business. Here are a few of the lighter moments from the climax of the election campaign you might have missed.

As Scott Morrison conceded defeat on Saturday night, his wife, Jenny, stood beside him at Liberal HQ wearing a striking pale blue – some even suspected teal – dress.

It was an awkward choice to say the least, with a tsunami of teal independent candidates unseating many moderate Liberals across Wentworth, Goldstein, Koyoong, Warringah, North Sydney and Mackellar.

But even more intriguing was the choice of designer. The $929 item was called the “Celebration” dress and sold by fashion label Carla Zampatti. Carla Zampatti was the late mother of Allegra Spender – one of the many teal candidates whose victory saw Liberal MP Dave Sharma booted from his seat in Wentworth.

Hanson ‘will survive’ Covid but may lose her Senate seat

Pauline Hanson could be a surprise casualty of this year’s federal election, with the final Queensland Senate seat sitting on a knife’s edge.

Running on an anti-vaccine mandate platform, Hanson’s party also failed to gain the momentum she’d hoped for in the lower house – with not one of her 151 candidates picking up a seat.

Earlier this week the unvaccinated politician attracted global attention after posting a bizarre announcement that she had contracted Covid-19. “I look forward to disappointing all of those who hope that I drop dead,” Hanson wrote.

Independent Allegra Spender said on Sunday morning she was yet to hear from Member for Wentworth Dave Sharma after her staggering victory against him.

The minister delivered a stinging critique of Morrison’s behaviour towards France, describing his actions as being “of a brutality, of a cynicism, and may I say a notorious incompetence”. Yikes.

Katherine Deves’ comments about transgender Australians have sparked a firestorm of criticism from moderate Liberal MPs and dominated headlines for months.

Despite suffering a substantial defeat against independent Zali Steggall, the Liberal candidate for Warringah has promised she is “not going anywhere”. But not everyone feels the same …

As Greens leader Adam Bandt spoke to ABC News last night, viewers couldn’t help noticing the volunteers in the background who looked as if they were supremely happy to be there.

Twitter users who switched over to Sky News’ election coverage last night were amused by the “grim” atmosphere as panellists announced Labor as the clear winner.

We’re not exactly sure who put the “sad face” TikTok filter on Paul Murray last night but what an absolute mood.

If there’s one thing that unites Australians it’s our love for ABC election analyst Antony Green. But even Green – known for being calm and cautious – was frazzled by last night’s election, declaring at one point that his “brain” was “broken”.

Green was also caught off guard when ABC presenters threw to him with a breaking news update when he had nothing of the sort to offer.

Anthony Albanese’s dog Toto was snapped wearing an “Albo for PM” bandana as she waited patiently outside a polling booth for her owner on Saturday.

Whatever your political leanings, you have to hand it to Toto for being the cutest pooch in Australian politics.

OK this was the day before the election, but indulge us. When Scott Morrison spotted Guardian Australia’s political reporter Paul Karp at a Western Australia campaign stop , he offered him a special kind of democracy sausage.

“There’s veggie ones here too, Paul,” the PM told Karp – who is not a vegetarian, just a Guardian journalist.