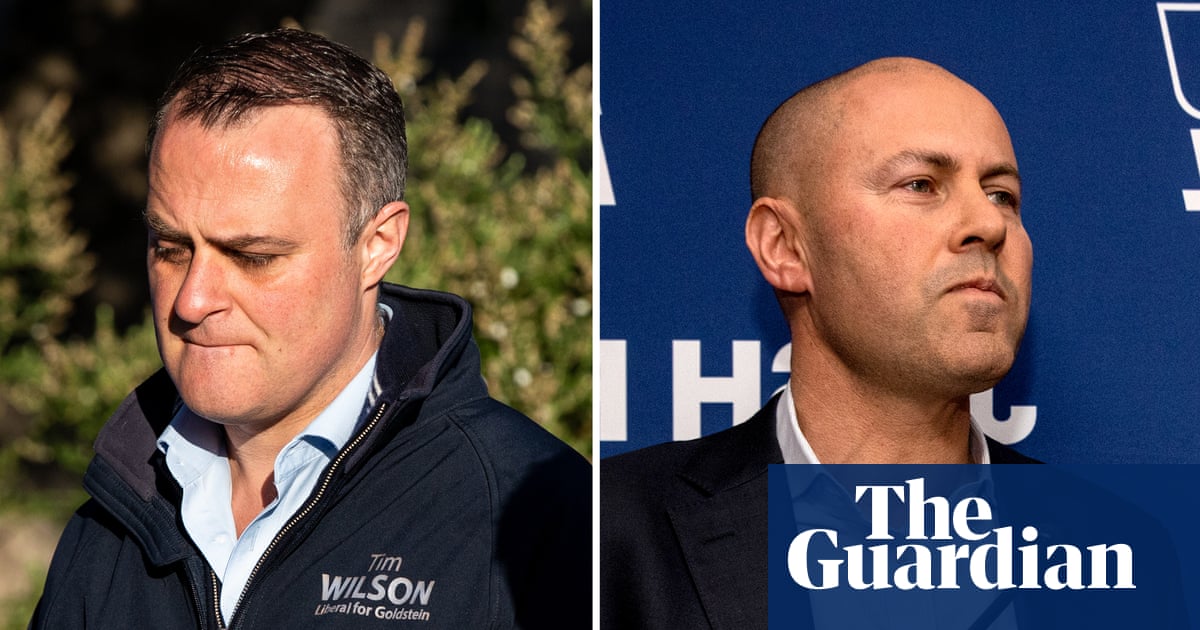 Several Liberal MPs who appear to have lost to independents – including Tim Wilson, Josh Frydenberg and Trent Zimmerman – are yet to concede, as record postal votes leave the incumbents a theoretical path to victory.

Despite independents leading with margins of at least 4,000 votes in the blue-ribbon inner-city seats of Goldstein and Kooyong in Melbourne, as well as North Sydney, the incumbent MPs are yet to concede the apparent teal sweep that may wipe out a generation of moderate Liberals.

On Sunday the independent in Wentworth, Allegra Spender, revealed she “hadn’t heard from [the Liberal MP] Dave Sharma today”. Spender said she would be the next member for Wentworth. She currently has a lead of 7,681 votes and is up 56.7% to 43.3% in two-party-preferred terms.

In the Perth seat of Curtin, Celia Hammond is yet to concede to Kate Chaney, despite trailing by 3,746 votes.

On Sunday Frydenberg told reporters in Melbourne that postal votes were about “12% of the overall vote” in Kooyong and that he would wait until more are counted before commenting on the “particular results” his electorate.

“It is mathematically possible that I could retain Kooyong but it is obviously very, very difficult,” the treasurer said.

According to the Australian Electoral Commission, some 23,380 electors in Kooyong applied for postal votes, with 16,676 returned but not counted and the rest not returned.

Frydenberg said he would “take some time to reflect on my future plans”, promising to “spend more time with the kids and with my wife”, but did not rule out a future political tilt.

Wilson suffered a 13.3% swing against him, bringing the Liberal primary down to 39.4%. In Goldstein, there were 21,374 valid postal applications, of which 15,256 postal votes have been returned.

Daniel told reporters in Melbourne that “obviously counting is still to happen”.

“But [ABC psephologist] Antony Green has called it. And we’ll go with that, with confidence in the numbers as much as there is some counting still to come,” the former ABC journalist said.

“It’s a big life change for me. It’s exciting though, and it’s a way of making a contribution to community that I never necessarily expected.

“But I have been so embraced by the volunteers who’ve worked on my campaign – that has been wonderfully positive. And I look forward to providing honest, sincere representation for the people.”

Wilson told Guardian Australia: “Time in parliament shouldn’t be measured in terms or years but outcomes. I’m immensely proud of everything we achieved in the last six years for the nation.”